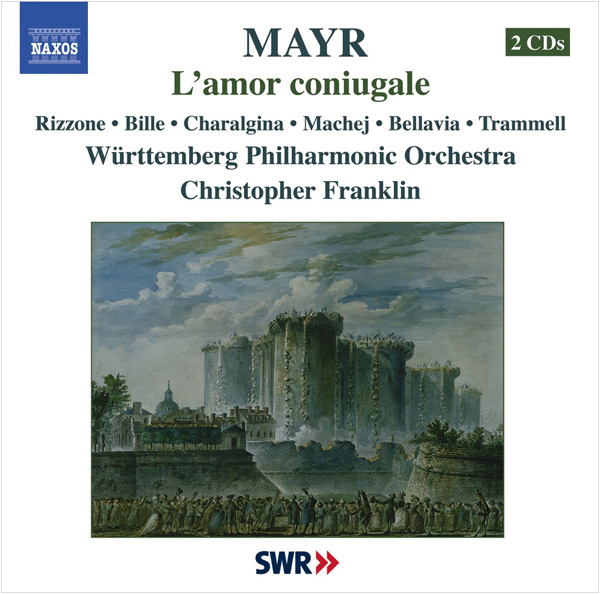 MAYR L'amor coniugale[/custom_headline][text_output]Based, like Beethoven’s opera Fidelio, on the original French libretto by Jean-Nicolas Bouilly, Mayr’s opera L’amor coniugale (Conjugal Love) won considerable success at its first performance in Padua in 1805. The story of the faithful wife seeking the release of her innocent husband from unjust imprisonment and imminent death, by disguising herself as a boy and serving as assistant to the gaoler, is transposed, in Mayr’s version, from real events during the French Revolution to personal conflict and inter-personal relationships in the exotic setting of seventeenth-century Poland.

Gramophone:
"....There is some fluent and imaginative music here.... Christopher Franklin, using a version of the handsome score loyally published by Mayr's adopted city of Bergamo, draws lively playing from his orchestra (there is no chorus). A long booklet essay by Thomas Lindner (no text or translation) makes out the best case for the work, an attractive one and certainly of more than curiosity interest."
- John Warrack, July 2008

The Guardian:
"... the recording, conducted by Christopher Franklin, is gorgeous, with exceptional singing from Cinzia Rizzone and Tatjana Charalgina as Zeliska and Floreska."
- April 2008

David's Review Corner:
"... The Wurttemberg Philharmonic Orchestra play well for the much experienced American conductor, Christopher Franklin, the tempos pressing forward with admirable urgency. The engineers have placed the voices forward of the orchestra, stage noises at an absolute minimum..."
- David Denton, March 2008